Currently, Mr. Manning operates in his calling as Lead Pastor at West Vanceboro Church of God. For eight years, he has served in this leadership role, which has allowed him to also serve the community.  He is a servant leader who believes we are better together and always strives to be a team player.

Mr. Manning has always been passionate about education, knowing that knowledge is power and the basic building block for society's development. He has a heart for students to be empowered and prepared for success. Mr. Manning loves watching people grow in their purpose, which allows them to positively contribute to our community and world. His goal for the educational system is to see our students become successful and productive citizens, in and out of the classroom.

Mr. Manning and his lovely wife, Jessica, have been married for 13 years. Together, they have two boys, Ezekiel and Liam. In his spare time, he enjoys reading, exercising, helping others, and relaxing with his family. 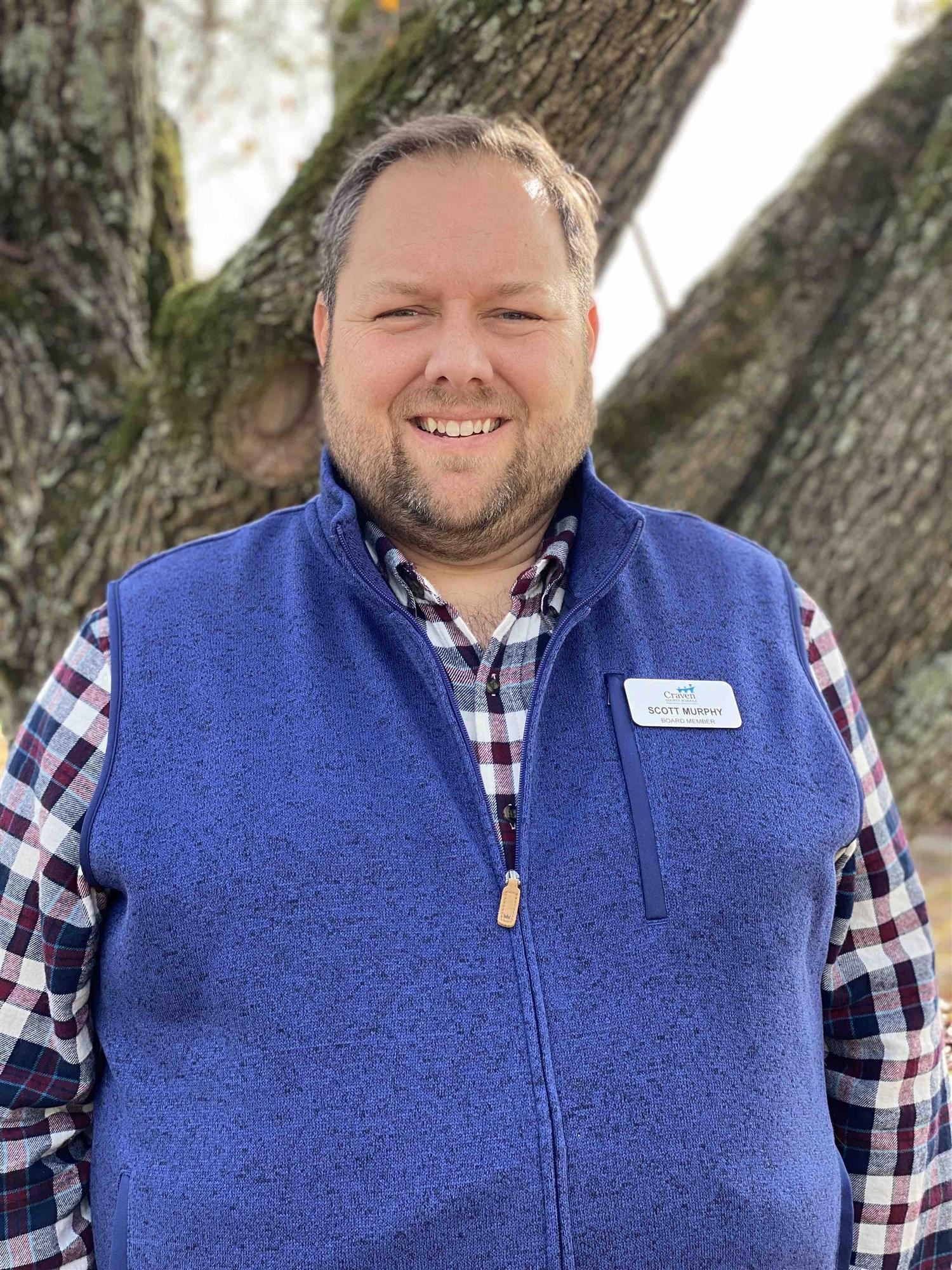 Mr. Scott Murphy, District 2 representative, is a native of Cove City and the son of a math teacher. He is a product of the Craven County School System from elementary school through college.

After graduating from West Craven High School in 2000, Mr. Murphy earned his Associate's Degree in Machining, Tool Die, and Mold Technologies from Craven Community College. He then worked as a machinist at FRC East for nine years before pursuing a calling to Christian ministry. Mr. Murphy was the Interim Director of RCS in New Bern during Hurricane Florence and has overseen disaster recovery and the rebuilding of homes for the last three years in Jones County.

Mr. Murphy is passionate about seeing the local community thrive, and this extends to our county school system of parents, children, staff, and teachers. He enjoys connecting people and resources to find solutions to problems and knows that “teamwork makes the dream work.”

Mr. Murphy has been married to his wife Rachel, a Havelock native, for four years, and they enjoy spending family time with their two toddler girls. 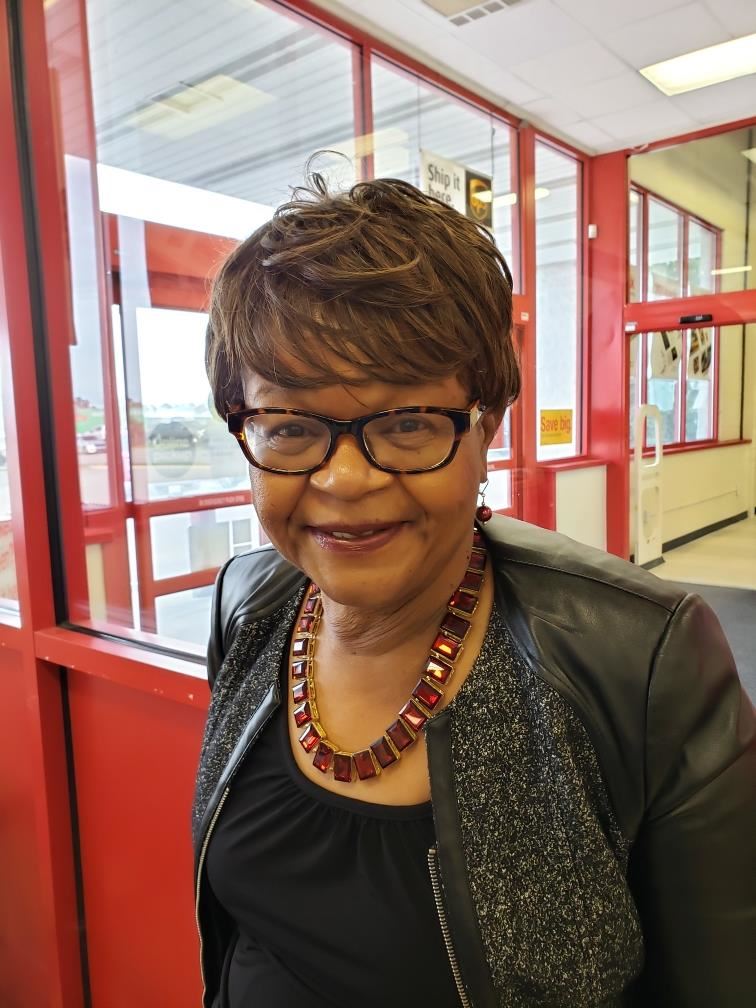 Mrs. Clark resides in District 7. It is her position that she is an advocate for all students in Craven County.

She has a B.S. in Criminal Justice from Michigan State University and a J.D. from Valparaiso University School of Law and has been a member of the South Carolina Bar since 1977.  Thereafter, she practiced law in South Carolina, Maryland, and North Carolina.  The common thread throughout her professional career has been education and law.  Accordingly, it would seem judicious for her to become a member of the Craven County Board of Education.

Mrs. Clark taught in the Craven County School System for approximately seventeen years and entered as a lateral-entry teacher.  This means that she used her previous professional history to bolster her journey as an educator.  She retired from the Craven County School System and decided to pursue a different journey in 2016. Her professional history included stints as an attorney representing both abused/neglected and delinquent children.  Additionally, she taught at the University of South Carolina Law School, Fresno City College, Park University, and Craven Community College.  She has also practiced in various U.S. District Courts as well as the Fourth Circuit Court of Appeals.  With her various roles as a parent, educator, volunteer, Mrs. Clark believes that all will be invaluable in her being an effective board member.

One of her proudest accomplishments has been the innumerable amount of volunteer hours she has devoted to public school systems wherever she has lived.  She is most proud of pursuing and introducing students to the judicial system by using the pedagogical tool of mock trials.  This has allowed students to learn about the judicial system while preparing a criminal/civil trial and competing against other middle schools in mock trial competitions sponsored by the North Carolina Bar Association.  This passion for affording students the opportunity to learn about the judicial system as well as promoting character education is something she will continue to pursue.

She will help to be the voice to make sure that Craven County School System is, in her words:

Mrs. Clark’s favorite slogan as well as her mission in being a member of the Craven County Board of Education is, “Just For The Kids!”. 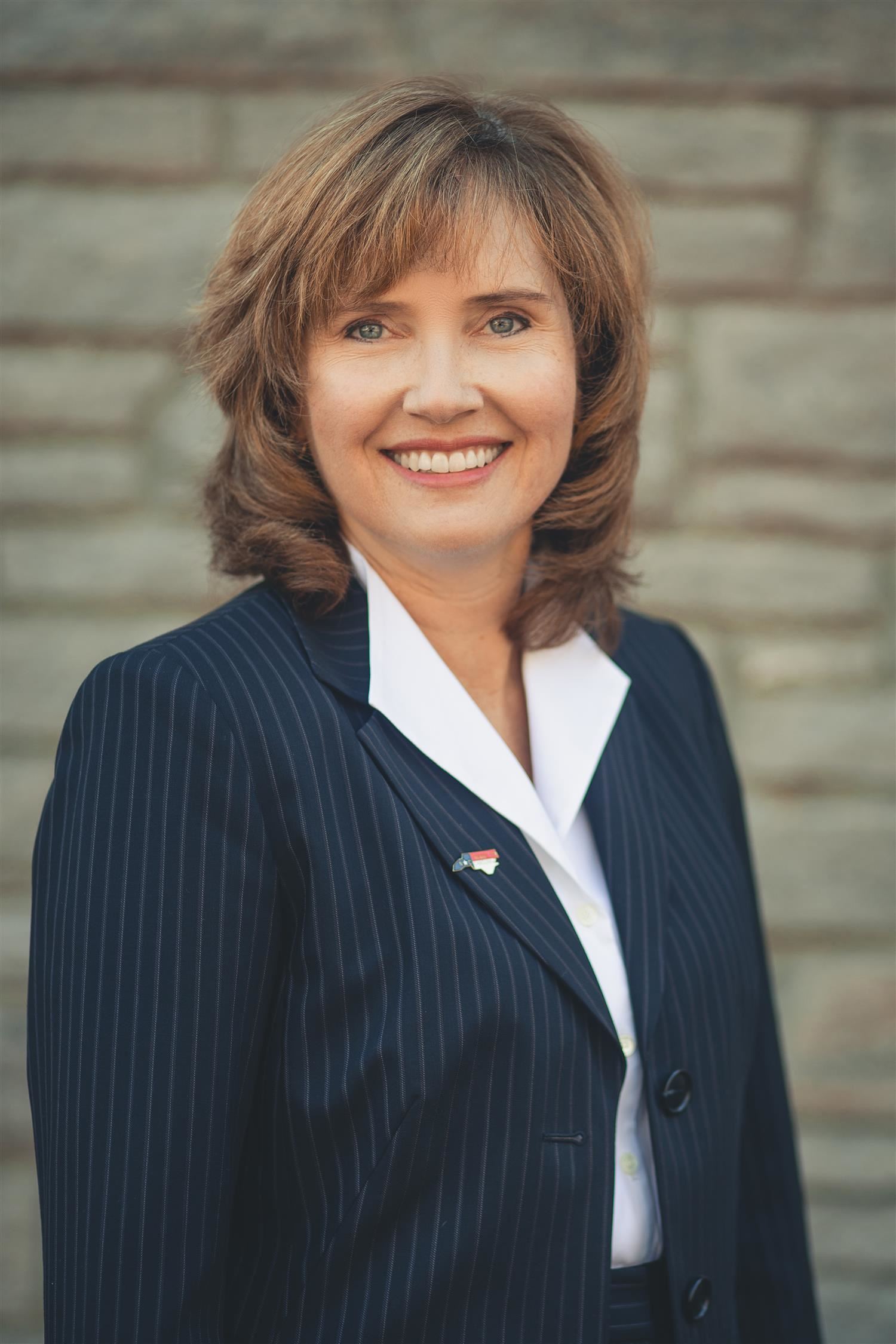 Mrs. Jennifer Dacey, a native North Carolinian, represents District 4. Jennifer and her husband Scott have been married for 29 years. They chose to move to New Bern 20 years ago to be close to their extended family and to raise their two children with eastern North Carolina values. Jennifer believes that to whom much is given, much is required. And she has made an effort to live out those values in our community, serving as the president of the Craven Community College Foundation, chair of the Craven County Juvenile Crime Prevention Council, board member of the Craven-Pamlico Re-Entry Council, trustee of Craven Community College, and president of the Craven County Republican Women’s Club.

As the daughter and granddaughter of high school teachers with a love for lifelong learning herself, Jennifer is passionate about ensuring that teachers, staff, and students have the resources and structure they need to succeed. She is most looking forward to spending time in our schools volunteering and learning about all that our school system has to offer.

Jennifer is a graduate of Duke University where she majored in public policy studies and history. After graduation, she worked for several years in Washington, D.C., and then attended the Antonin Scalia Law School at George Mason University, from which she graduated with High Honors. Jennifer began practicing law in Falls Church, Virginia, where she dealt with a wide range of civil litigation matters. More recently, she practiced in the trusts and estates area at Ward and Smith, P.A. in the firm’s New Bern office. She is licensed to practice in both North Carolina and the Commonwealth of Virginia and has handled matters in both state and federal courts. 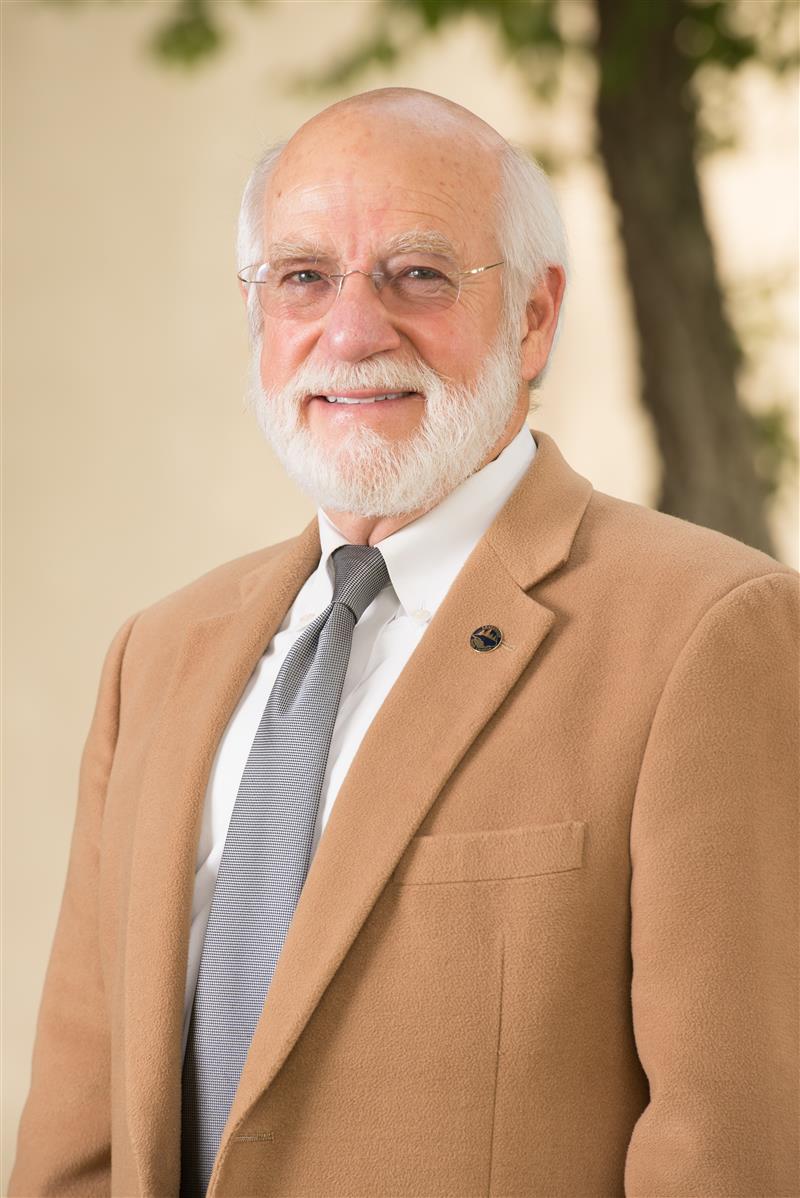 Mr. Ipock represents District 3 and has attended the University of North Carolina, received his Associates in Science from Craven Community College and a Bachelor of Science in Chemistry from East Carolina University. Mr. Ipock was a member of the US Army Reserves from 1969-1975. Mr. Ipock's personal achievements include being the Craven County Board of Education Chairman since 1994, a member of the Committee of 100 for Craven County, CETC, Inc - Board Member and Chairman. Mr. Ipock brings business industry knowledge as he was employed for 34 years as a Production Coordinator for Weyerhaeuser Company. He currently serves as the Treasurer of the North Carolina School Board Association.

Mrs. Lauren Riggs Kitzinger represents District 6 of the Craven County Board of Education.  Having been born and raised in New Bern, Mrs. Kitzinger is a product of Craven County Schools and graduated from high school in 2005.  She attended Craven Community College, but eventually graduated from North Carolina Wesleyan College with a Bachelor of Science in Business Administration, summa cum laude.  She is married to Matthew, who has been serving in the Marine Corps for over 27 years.  Together, they share 5 boys – one who graduated from New Bern High School in 2021 (Austin); the middle 3 boys (Nate, Blake, and Benjamin) currently attend Craven County Schools, and the youngest (Beau) will start kindergarten in 2023.

Lauren’s passion is her children, which is what led to her desire to serve on the Board of Education. She believes that every child deserves a thorough, quality education and that we each carry a vital responsibility in ensuring that reality.  She is committed to effecting positive change with the intent of maintaining and requiring transparency, respect, and accountability. 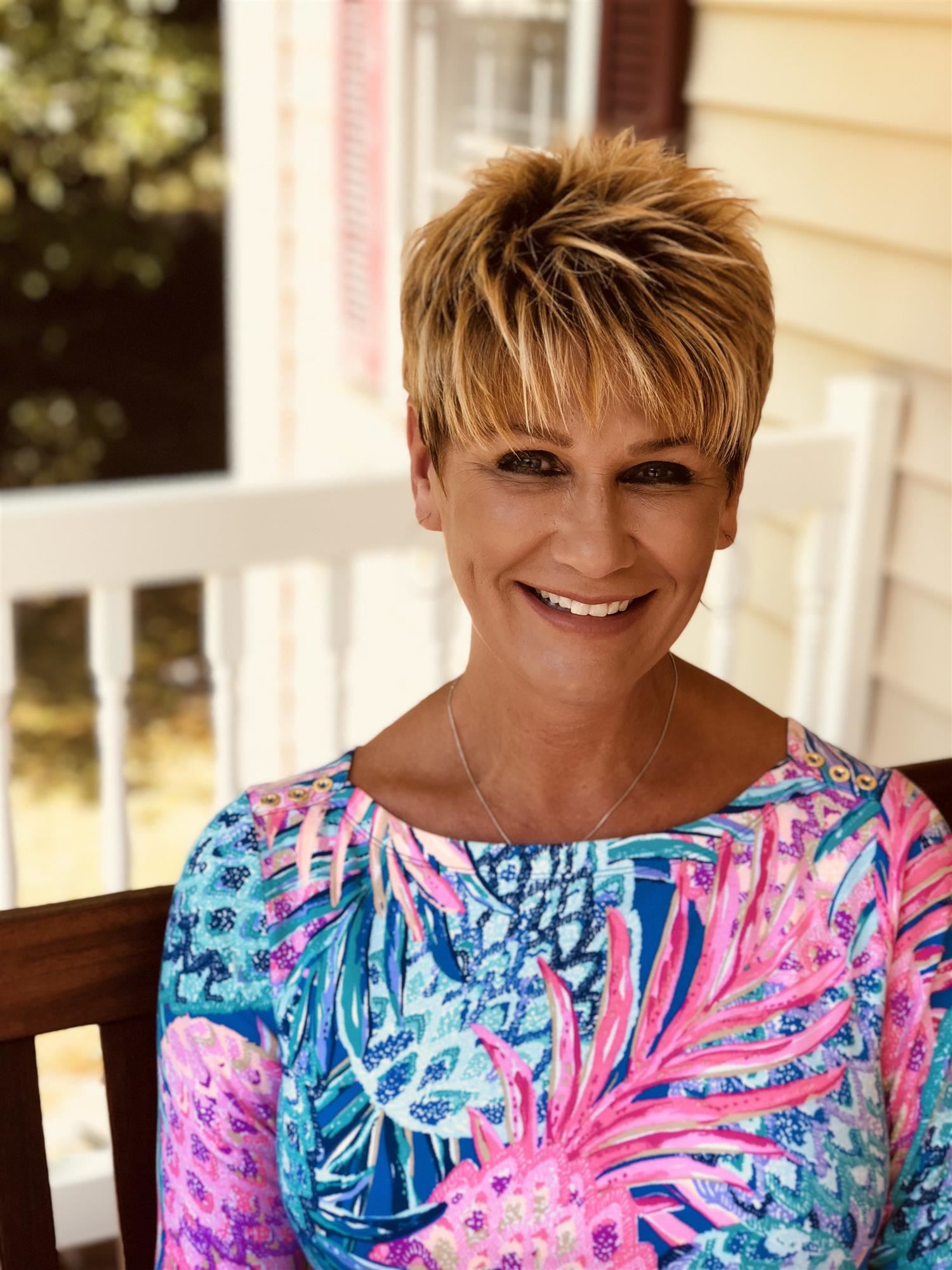 A wife, mother, educational professional, business owner, and animal lover, Mrs. Kelli Muse represents District 5.   She is married with two wonderful children.  Her daughter currently attends New Bern High School and her son, a graduate of New Bern High School, is currently serving in the US Navy.  Mrs. Muse and her husband, Greg, are long-time business owners in Craven County.

Mrs. Muse began her educational career with Craven County Schools as a Program Assistant with Career and Technical Education.  She was responsible for fiscal operations of state and federal CTE funding as well as assisting with program implementation and business partnerships.  She currently serves in the same role in Onslow County Schools.

An avid animal lover, Mrs. Muse raises and shows French Bulldogs in AKC conformation and currently has two AKC Grand Champions.  When her son was in elementary school, she volunteered to start a reading with dogs’ program for exceptional children.  Students would read stories to the dogs to build confidence by reading aloud.  She also organized a visit to local elementary schools by author Deborah Stevenson, who wrote “Soaring Soren: When French Bulldogs Fly” which emphasized the importance of believing in yourself and that champions come in all different shapes and sizes.

Coming from a family of educators, Mrs. Muse has a passion for students and ensuring they have the tools and resources necessary to pursue their career goals.